Fitness watches have been all the craze for quite a while now. As technology expands and increases, more people want the all-in-one approach that smartwatches offer. To have your phone and fitness tracking all in one place on your wrist is a huge appeal, and companies from all over the world have taken advantage of the market. There are countless sports watches out there from brands that have been around for a long time and new ones trying to get their foot in the door. Every watch has a specific target audience, and different watches are better for different people depending on your preferences.

Nixon is a company that has been dedicated to outdoor and sports gear for quite a long time. Since 1997, they have been putting out watches found across thousands of snow, surf, skate and sports shops. They have multiple sports watches for sale, and one of those is the Nixon Mission released in 2016. Designed as a higher-end watch, it attempts to offer both on-par athletic tracking, smart features and connectivity so you can bring your smartphone with you wherever you go. Nixon has targeted skiers and surfers with the Mission, creating a rugged watch that will last in snow or water and in the coldest temperatures.

The Nixon Mission is a watch that doesn’t play games. It is designed for a specific group of people, and those outside of that group may not find much use out of it. It has a rugged, waterproof design for the most adventurous activities. Its tracking is accurate, and it features smart connectivity to your phone so that you can read text messages or control music playback.

The design of the Mission is very bulky and rugged. It is probably larger than other smartwatches you may have gotten in the past. The outside casing can be purchased in gray, black or orange. The strap is a comfortable rubber design that can be switched out if desired. The display is aesthetically pleasing when compared to similar watches. It offers a lot of different customizations for the 1.39-inch touchscreen display to make it personal for each wearer.

The waterproofing for the Nixon Mission is top notch at an incredible 10 ATM. The ATM stands for atmospheres, which means the Mission can take up to 10 times of sea-level atmospheric pressure. To put this into perspective, basic swimming is usually around 2 to 3 ATM, with diving being slightly more. So this watch is great for swimming, light diving and snorkeling, but not for the very strong pressure that comes from scuba diving. However, you must remember to close the microphone hole before getting into water. There’s a small little hatch that goes over it so water will not go in.

The Nixon Mission tracks various types of fitness activities. It comes with GPS, which is crucial for skiers, surfers, and hikers who won’t always have direct access to their phones. It’s an Android watch, and this is one of the few that actually comes with built-in GPS. There’s even a feature on the Nixon phone app that will allow you to plan ahead of time by pinpointing your predicted location so it can tell you about what kind of weather and conditions to expect.

You can listen to music on the watch by either importing songs directly to it or by streaming from your phone. There is, of course, access to basic apps like calendar and weather as well. The watch also allows for voice commands, texts and calls. You must remember to open the microphone hatch if you plan on taking advantage of the voice command feature and to close it when you plan on entering water. For those who don’t plan on using voice commands much, it’s probably best to just keep the microphone hatch closed at all times so you don’t forget.

The app itself is great but could be more detailed and have more variety. There are snow and surf settings, so skiers can see their altitude and speed while surfers can see their distance and speed. You can also track your steps, basic workouts and set goals for yourself. All these things can also be seen directly from the watch itself, which is a plus.

The watch fails when you attempt to use it on an iPhone. Being an Android watch, it’s obviously Google and Android biased, and there are several bugs in regard to iPhone compatibility. Apple has been known for limiting non-Apple apps and gadgets to their own. You cannot respond to messages or calls on the watch when you’re using an iPhone. The watch has a hard time staying connected to the Nixon app on the iPhone. A lot of times, you have to reconnect the watch to the app when you want to update things like weather and conditions, which can be annoying.

It’s also disappointing that the Nixon Mission does not track sleep, nor does it have a heart rate monitor. For how expensive this watch is, it should come with these features. Similar watches at similar price ranges also have Wi-Fi connectivity, but the Mission does not. This would allow for connectivity for apps and notifications at times without the phone being nearby.​​​​

The battery life of the Mission is worse than disappointing. If you use it fully every day, you will need to charge it every night. For the price tag and for how big it is, you would think they would have invested in a better battery. Without taking advantage of the full use of the watch, it will last a little bit longer. For example, if you don’t use the GPS, it may last two days instead of one. Even still, having to charge this watch several times a week is a huge downside.

The Nixon Mission is obviously geared toward skiers and surfers. It’s incredibly durable, and it will definitely make a statement if worn as casual wear. Not only is it a great fitness watch, but it’s also a decent smartwatch with phone connectivity, though it works much better with Androids than iPhones.

The Nixon Mission has an incredible screen with 400×400 pixel resolution. It’s made of stainless steel that is surgical grade to endure the roughest conditions and biggest dings. The screen has both adjustable and automatic brightness. You can turn the screen asleep as well in order to save battery. The screen has a round angle for optimal viewing.

Apart from the strong steel, it also has polycarbonate plastic and Gorilla glass display. No matter how cold or hot the conditions, the Mission is built to withstand. Inside, there’s a Qualcomm chip that runs Snapdragon that drains the battery quickly.

No matter where you look, the price for the Nixon Mission is going to be the same price: $400. Regardless of if you’re on the Nixon website, Nordstrom, Bait, REAL Watersports or Amazon, the price is generally the same across the board. However, you can find a used or refurbished Mission on Amazon from $290.

The choice lineup for comparisons consists of one watch from Apple (the Apple Nike+ Sports Watch); the Garmin Forerunner 935, which is the high-end option; and the Polar M400, which is the low-end option.

The Garmin Forerunner is the most expensive, which is understandable considering all of its features. The Apple Nike+ is about $70 less than the Nixon Mission. The Polar M400 comes out as the least expensive. 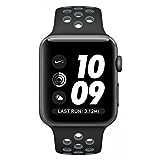 The Apple Nike+ comes out on top. It’s incredibly user friendly and easy to use with compatibility across numerous Apple and third-party apps. The Garmin Forerunner is a close second with a simple user interface and great app capability. The Nixon Mission takes some getting used to, but once you’ve had the chance to play around with it, it becomes fairly easy to use, and the Nixon app is very good, but not great. The Polar M400 can be confusing along with the compatible app.

Apple wins again with an incredibly quick and easy setup, with Garmin close behind. The Nixon Mission takes just a little more time, especially if you have an iPhone. The Polar M400 comes in last again with a slightly more complicated setup process.

Both the Nixon Mission and the Garmin Forerunner 935 have incredible design quality and are durable for any condition. The Nike+ comes in next with its long-lasting, trusted Apple quality. The Polar M400 is the low-end option, so obviously it’s quality won’t be as great as the others.

All watches except the Mission offer only one-year limited warranties, while Nixon offers a two-year hardware and repair warranty.

The Nixon Mission is a great fitness watch for skiers, snowboarders and surfers. It has a huge array of sensors and is 10-ATM waterproof. Its snow and surf features offer a lot for athletes in those conditions. Its rugged design will withstand the worst weather conditions. The GPS isn’t the best, though, with just basic functionality. The Mission’s poor battery life and buggy iPhone compatibility really make it lose out in the long run.

When paired with an Android phone, the smart features truly shine. With voice commands, audio playback and full app functionality directly from the watch, it becomes one of the best smartwatches on the market. However, this is also a downside. For a $400 fitness watch, it is expected to be mostly a sports watch and less of a smartwatch. However, with the Nixon Mission, it is more of a smartwatch than it is a sports watch. Other watches within the same price range have heart monitors and track sleep, but the Mission does not.

Overall, it’s a great smartwatch with good sports-tracking capabilities. If you are a skier or surfer looking for a smartwatch that will also track your activity, this is a great choice for you. For others focused on different sports activities or who are looking more for fitness features than smart features, there are other choices out there that will get you more bang for your buck.

Hydro Flask Outdoor Gear Review: Everything You Need To Know