If you’re an avid fitness junkie, or even an aspiring enthusiast, the idea is that you need an activity tracker to keep up with your workouts. Not having one can cost you precious details, and information, regarding your training.

This may not be a problem to some, but for those that want to make the most of their time in a gym, on a mountain side, or running a half-marathon, a tracker can help you.

Of course, not all fitness devices are created equal. In fact, almost every technology manufacturer has their own iteration of a fitness band now, and it’s becoming increasingly popular for bootleg companies to make their own.

You know, though, that these don’t compare to companies that have been doing fitness for a while, such as Mio.

Today, we’re going to take an in-depth look at one of their more popular options: the Mio Fuse.

What is the Mio Fuse and How Does It Work?

The Fuse, at its core, is a simple activity tracker and heart rate monitor that will work during different sports and activities.

To start out, the Mio Fuse is different than certain activity trackers or high-end GPS watches in that it’s a basic device and should serve primarily as a compliment to a watch, not a standalone device.

The strap is a bit bulkier than other activity trackers, coming it at 1.2-inches thick. Plus, that width is almost universal across the whole band, making it wide at all points. On the flip side, the Fuse only weighs 1.4-ounces, making it very lightweight on the arm.

That’s not to say it can’t perform as an all-in-one device, as it can due to the wrist-based heart rate tracking, sleep tracker, step counter, and distance. All the information is displayed on a dot-matrix style screen, which uses the same idea as calculators.

Essentially, there is no fancy display to stare at, and the simple dots make it easy to see during any workout.

The dots use colored LED and vibration alerts to indicate the heart rate zone you’re in during activity. This makes it easy to track and monitor your fitness levels either during or after a workout.

Using the Fuse is mostly simple, as it’s functionality is based on tracking your heart rate during activity, while being weather-resistant and having a customizable display help make it personal. The Fuse uses Bluetooth technology to share your data real-time to your smartphone, along with apps and fitness watches alike.

As for the battery, the Mio Fuse has a rating of seven-days with an hour workout sprinkled in.

To make sure you get a workout in every day, or every other day, you’ll need to secure the right sized band. There are two size options, with the S/M fits wrists from 5.8-7-inch wrists, while the L strap is made for 6.1-8.2-inches.

Quick Navigation
What is the Mio Fuse and How Does It Work?
Setup to Go Out and Conquer Your Workouts
What Makes the Mio Fuse Unique?
Using the PAI to Your Advantage
Let’s Talk About the Price Point of the Fuse
What Do Real People Think of the Mio Fuse?
The Competition for a Heart Rate and Activity Tracker is Fierce​
Our Thoughts on the Mio Fitness Tracker

Setup to Go Out and Conquer Your Workouts

To get the most out of your Mio Fuse, upon setup you’re asked to enter the standard metrics: height, weight, activity level, and general fitness level. After doing that, every time you hit the road or trail, the Fuse algorithm will let you know how many calories you’re burning, and how intense the workouts are.

This sounds easy, but you’ll need to download the Mio app to tinker with all the settings.

The Mio Go app is one of the biggest frustrations with the Fuse, but fortunately you don’t need to use it often, at least not after the initial setup period.

After that, your device can store up to 30-hours of workout data at a time, or two weeks of daily activity data. Remember, if the onboard storage isn’t enough for you, the Fuse uses Bluetooth 4.0 technology to transmit data real-time to other devices.

This makes it easy to use, and track, your data over months within different applications if you want to.

Also, the last thing to note regarding usage is that you’ll need to wear the band slightly higher on your arm, and wrist, than normal during workouts if you’d like accurate heart rate information. It can feel weird at first, but the higher portion of the wrist allow the sensors to work better.

What Makes the Mio Fuse Unique?

Other than the definitive looks and dot-matrix display, the Mio Fuse enables you to track your fitness and heart rate for a fraction of the price that other activity monitors do.

It sports a very comfortable design, ensuring you won’t get tired, or marked, from wearing it over long periods of time. The band is formed from a soft silicone and has plenty of ventilation holes to keep you cool when in use.

Another feature that you won’t find in all fitness trackers is the transmission of data to other applications.

It may sound cheesy, but most other companies require you to use their proprietary software to see the full read-out of your workout data. This isn’t the case with the Mio, meaning you’re free to choose how you keep your data organized.

Using the PAI to Your Advantage

The last feature that you can only find among Mio devices is the Personal Activity Intelligence metric, or PAI. Unlike other fitness-based metrics, PAI uses your body’s response to physical activity. This allows the formula to track, and provide, how much you’ll have to work to maintain your current health.

Of course, you can use it to set and achieve goals too.

The only drawback to this neat new feature is that you’ll have to use the separate Mio PAI app to use it.

Lastly, you’ll need a mobile device to use the Fuse, so that’s something to keep in mind before purchasing regardless.

Let’s Talk About the Price Point of the Fuse

Unlike other workout and activity trackers, the Mio Fuse is a relatively inexpensive device.

This is partially due to not having a screen and limited functionality on the device itself. Mio decided to cut out the unnecessary tools on the device in favor of rolling out band options within an app.

All in all, this means that the Fuse will set you back only $70, no matter if you purchase the small or large bands. The Fuse comes in three different colors, with your options being a cobalt, aqua, or crimson, respectively.

Sometimes it’s hard to remember how far technology has come, and this is one of those instances where having an inexpensive heart rate monitor and activity track in one for less than $100 seems crazy.

What Do Real People Think of the Mio Fuse?

While it may be cheaper than the competition, does that mean it performs?

While it may seem hard to believe that the Mio is able to deliver some decent performance for the price point, it’s true, for the most part at least.

The jury is still out on whether the Fuse can be considered among the great activity trackers out there, but it’s fair to say it’s a good option.

Most of the time people complained that syncing issues were the culprit of lower ratings, as was the heart rate functionality when heavy sweating occurred. Ironically the device seems to work when swimming just fine, so the sweating portion, considering this is what happens when out of a pool, is a valid concern.

For some people, the earlier versions of firmware meant worse issues, but now you should find most of these problems ironed out.

The Competition for a Heart Rate and Activity Tracker is Fierce​

As mentioned at the top, there are tons of fitness devices that have flooded the market within the past few years.

Everyone wants to cash-in on the activity trend, and people are after more data than before with their workouts. When you step into the category of heart rate monitors under $, there are multiple options.

To start out, one of the biggest names in fitness, currently, is Fitbit. Their Fitbit Charge 2 wristband has an on-screen display, serves as a watch, can track your active and resting heart rates, and features GPS. GPS is the biggest difference between the Charge and something like the Fuse, and it’s up to you to decide if the extra $60 is worth it.

The best part of the Fitbit is the integration with outside apps, and the smartphone implementation, which is decidedly better than Mio’s, at least currently.

Garmin has their own inexpensive heart rate monitor with the vivosmart 3 activity tracker. This device is a sleek alternative to the bigger Charge and Fuse, all while offering a good interface to track your fitness.

It can measure your daily activity, such as step and calories burned, along with sleep activity, floors climbed, and stress levels. Everything is displayed across a crisp OLED screen, and there is even a silent alarm to wake you, not others, up when needed.

The vivosmart 3 is only 0.7-inches thick, which is almost half of the size of the Mio Fuse, making it easy to wear around. It retails for $120 and doesn’t have GPS.

The last major competitor is Polar, with their A370 fitness tracker and heart rate monitor.

This offering has most of the same features as the other trackers listed above but comes in at a price point of $145. Sure, it’s waterproof, as a great display, and a good sensor for tracking your heart rate, but the GPS is unreliable, and the battery life could be better.

It’s also thicker, and heavier, than the Charge 2 and vivosmart, making it a tough choice over the Fuse or other two.

Sometimes, the cheaper or more polished options win out, and in this case the Fuse is by far the cheapest option. If you need more from your fitness device then there are options out there but, currently, you’d be hard-pressed to spend more unless you absolutely need to. 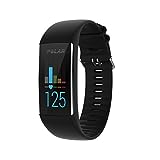 Our Thoughts on the Mio Fitness Tracker

For us, we think the Mio Fuse is a decent heart rate monitor with basic fitness tracking capabilities.

It’s a good option for those that require a no-frills style monitor, but anyone craving deeper metrics will be disappointed. Of course, the Fuse doesn’t try and be a deep activity tracker. On the contrary, it strives to help those with no fitness tracker in their lives a way to rectify that.

The overall device is comfortable, and it’s one of the better constructed devices we’ve seen, even if it is just a soft silicone material.

One of the best features of the Mio is being able to transmit your data to different apps and devices, and this can’t be overstated. Basically, Mio is saying that you can use any application to keep your data organized and stored that you want.

Almost every other fitness band on the market requires you to use their software, so this really is a huge win.

We’re impressed with the battery life, and the fact that the step counter is surprisingly accurate, along with the distance measurer, considering there is no GPS built-in.

Some pitfalls, though, include the customer service department, there aren’t any smartphone notifications currently, and the design is a bit bulky.

At the end of the day, if you want a decent quality fitness tracker and heart rate monitor, the Fuse could be a good option for you.

Mountaintop Backpack Review: Spacious and Supportive Enough to Carry All Your Gear